This is Scientific American's 60-second Science, I'm Susanne Bard.
Dogs began to diverge from wolves tens of thousands of years ago, when their wild ancestors started interacting with humans. Over time, domestication shaped canine behavior, and today dogs are especially ad﻿﻿﻿ept at understanding cues from humans. For example, when a person points at a bowl, a pet dog will usually approach it.
"All kinds of complex pointing gestures have been tried with pet dogs, and they seem to be good at it."
Behavioral biologist Anindita Bhadra of the Indian Institute of Science Education and Research.
Wolves are a different story, however.
"When the same experiments are done with semi-captive wolves, wolves seem to be quite bad at it. So there's this big open question of 'How did dogs become dogs?'"
Bhadra is interested in whether dogs require training to understand cues like pointing or if the behavior is innate. Most studies have focused on pet dogs in developed countries. But Bhadra thinks it's a mistake to overlook how stray dogs respond to human cues.
"In India, we have a huge population of stray dogs. They're not controlled by humans. And they live on the streets for generations. So we felt that the free-ranging dogs are a very nice system, which could give us inputs about what dogs could have been like before they came into our homes, before we made them parts of our families." 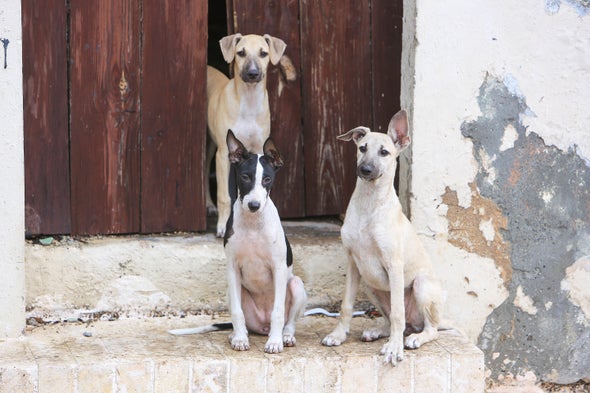 For the study, the researchers approached stray dogs on the streets of several Indian cities. One experimenter presented the dogs with a piece of raw chicken in a plastic bowl. About half of the time, the dogs ran away scared. But the friendlier dogs that stuck around were tested for their ability to respond to pointing.
"And the idea was to test the innate ability of dogs to understand simple gestures like pointing cues when they have no training whatsoever."
Once a dog proved interested, the first experimenter put chicken in one of two bowls and covered both bowls. A second experimenter—who had no knowledge of which bowl contained the meat and thus could not give subconscious cue information—pointed at one of the bowls while the dog watched.
"And then, in this experiment, about 80 percent actually followed the point and went to the bowl that we pointed toward."
That result was true whether the experimenter pointed at it just momentarily or for an extended period of time.
Bhadra thinks this demonstration provides evidence that training is not required for dogs to understand complex pointing cues. The study is in the journal Frontiers in Psychology.
Perhaps further studies with feral canines can help reveal more about what makes dogs our best friends—apparently even when a person and a dog have just met.
Thanks for listening for Scientific American's 60-second Science. I'm Susanne Bard.